Let it be so 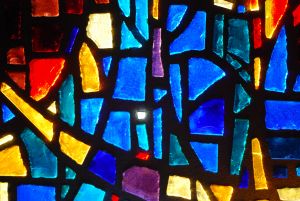 But as we are discipled by the Holy Spirit, we come to experience the grace, peace, and comfort of Christ, empowering us to pass on these gifts..

Regina Shands Stoltzfus, assistant professor of peace, justice and conflict studies at Goshen College, tells a story in the Mennonite that is important to retell today, on this second Sunday of Advent, 2017. In fact, we have a special guest with us today… Rosa, will you tell your wilderness story? (Turn around, put on hat and become Rosa Parks.)

My name is Rosa Parks and I lived in Montgomery, Alabama back in 1955. I was 42 then. My family was Scotch-Irish on one side and my great grandmother was a slave. I went to the Industrial School for Girls in Montgomery as a young girl, but I quit school to take care of my grandmother….I remember my father standin’ outside our house in the evening as the Klu Klux Klansmen rode past—it was frightening!. I started to notice that white children lived a very different life than me and my friends.

But then, I married a wonderful man, Raymond, a barber. Ray took me to to the meetin’s of the NAACP- the National Association for the Advancement of Colored People.

And I had a good job at Montgomery Ward, the department store there. I would ride the # 3 city bus and come home around 4:30 every evening. But on Dec. 1, my life changed. I got on the bus that afternoon, same as always and sat in the “colored peoples section in the back of the bus, but I sat in the first row. After several stops, enough white folk got on so the bus driver said, “All right, you darkies, get up and move on back. Three others moved, but I did not. He tol’ me he was going to call the police and have me arrested if I didn’t move. I tol’ him he could do that. And he did.

“People always say that I didn’t give up my seat because I was old and tired, but that isn’t true.. No, I was only 42 and the only tired I was, was tired of giving in.”

I remember the police officer pushing me around. I ask’ him, “Why do you push us around?” He answered, “I don’t know, but the law’s the law, and you’re under arrest.” But that was the very last time that I would ever ride in humiliation of this kind.” And my church supported me!

I went to jail. Four days later, 25,000 pamphlets were handed out, telling the black folk to stay home on the day of my trial or to walk to work, but not to ride the buses. And they listened. They called it a boycott. And it lasted not just one day, but over a year, until the Su-preme Court decided that everybody should be able to sit wherever they please on a bus.

But after that, things begin to change in Alabama and later, when I was in my 80’s, I helped the people of South Africa when they were having the same kind of troubles. And they finally got their freedom, too.

But as we are discipled by the Holy Spirit, we come to KNOW the grace, peace, and comfort of Christ.

Rosa Parks was in a wilderness of endless racism. Her refusal to be treated disrespectfully started the Civil Rights Movement . But Rosa was a Christ-follower, active in her church. As she was discipled by the Holy Spirit, she grew in grace, she knew what forgiveness felt like and as she experienced that freedom, it gave her the courage to be authentic, to live the right and the true, and in her case, the right and the true was simply refusing to be humiliated any longer. She literally just had to sit there in her seat, not defiant, but immoveable– to be obedient to the Spirit.

What’s your wilderness? Can you name it? There have been all kinds of wildernesses. For many Jews, in Jesus’ day, it was believing in a literal wilderness—that’s where they believed God would act.

In today’s scripture, verse 4, says John the Baptist was in the wilderness. John was the ultimate minimalist, from wearing animal skins to eating bugs and never shaving, he was the very definition of a first century hippie/acetic. He was also a powerful communicator, however, and just different enough that scripture says the EVERYONE in Judea and ALL the people of Jerusalem went out to the Jordan River to hear him….and to be baptized by John as they confessed their sins. John preached repentance, being sorry for your sins, and also to announce that God’s Kingdom was beginning! He was a rock star of an evangelist!

John, the Baptizer! Baptism-BAPTIZO in Greek-means to immerse. In Hebrew it is referred to as a MIKVEH … where one is taken under water to symbolize new birth, a washing of our entire body all at once to symbolize new birth. What the people were not familiar with was John’s reference to the Holy Spirit.

But John also offered grace- FORGIVENESS_ and the peace that comes from coming clean, for admitting that you can’t do it on your own, that you need to be immersed and washed. You need to start over, a new beginning! Being baptized was part of a ritual of cleanliness that Jews in particular were very familiar with.

And so, it made sense that Jesus, who was very Jewish, would also come and participate in this meaningful ritual.

Last Sunday we heard Wonder yelling to God! “Bring the Light! Tear open the heavens right now! “ The Gospel of Mark, indeed, begins with the heavens being ripped open and the Spirit in the form of a dove, coming down as Jesus is ritually baptized in the Jordon! later gospels. Mark, the earliest known written story of the Christ, skips all that baby in a manger stuff and jumps right into when Jesus was right around 30 and serious about being called. It is helpful to understand the story in relations to Jewish patterns of thinking common in Jesus’ day. Many had suffered under Roman rule and desperately hoped that God’s heavenly kingdom would gain a foothold on earth. Mark’s good news is that indeed, God’s Kingdom is very near, but that followers of Yeshua must hold on and be willing to suffer, waiting for God’s renewal of the world.

John seems to have been aware of his role as a prophet to prepare the way for the Christ, the Anointed One. It is in Mark that Jesus and John seem to be tag-teaming, with Jesus being forced into the wilderness directly after his baptism and then becoming active with John’s message directly after John was arrested.

Did your spiritual journey begin in the wilderness- you know, the day you knew you were going to follow Christ? Midba and eremos are Hebrew words used to describe wilderness. Words translated as “wilderness” occur nearly 300 times in the Bible. The collective  Hebrew memory of the years of “wandering in the wilderness,” searching for a promised land, made the idea of wilderness come to mean the place where God was

What does wilderness mean today for Christ-followers? It is a code word, I think, for the memory of the time when significant memories begin to shape our spiritual journeys, as individuals as well as churces. It could be not giving up a seat on a Montgomery bus, which led to a whole new freedom movement. Perhaps your wilderness was the time you listened to the tug of the Holy Spirit and spoke up when you saw the unequal treatment of women or abuse of power or advocating for people of “otherness”. Perhaps your wilderness experience is a rebirth of the Anabaptist ethic of simplicity, or making reconciliation the center of who you are and what you stand for. From the wilderness comes our calling.

And John knew this, and Jesus recognized it. If we have an encounter with God, and are willing to be disciple by RUAH- the Holy, wild Spirit of God—it is THEN that we begin to know what grace, forgiveness, and comfort is all about.

Perhaps you are called to preach repentance of the literal murder of hundreds of species as our beloved literal wilderness land is being destroyed, mostly in order to build cattle and poultry factories to feed North Americans. Perhaps you are called to a new baptism and ministry of ecological conservation. As millions migrate over our globe to find the basic necessities of life, perhaps God is calling new John the Baptists to preach against the myth that we will always have an endless supply of fish in the oceans and cattle on the hills.

But as we are discipled by the Holy Spirit, we come to KNOW the grace, peace, and comfort of Christ.

What is your grace, your forgiveness made of? Is it just for peace of mind, or from it do you find yourself being launched into a calling and ministry that is larger than you could have dreamed? Have you been called to be immersed in the Holy Spirit so that God is glorified? Are you like John the Baptist, called to be weirdly different from the world in dress and diet, or like Jeremiah, who did not want his Divine assignment, but was swallowed and consumed by his call to prophecy? Anabaptists used to be known for being very different from the world? Have we lost that, and if we have, can we get it back? Are you ready to be labeled different than the world? OR do we just want to fit in?

“What do you sense God is calling you to be, to do?” “How is God working in and through you?” “How do you see your gifts fitting into the work of God’s kingdom?” So often, the responses of professing Christ-followers have been ambiguous or a simple, “I don’t know.” “I never thought about it.” “I don’t have any idea what gift(s) God has given me.”

She goes on to say that God breaks into the reality of our days and doesn’t accept excuses to our assignments. God tells Jeremiah, “You will do it….and don’t be afraid, because I am with you..” Somewhere in the obedience package is the equipment that is needed to do the job. “

Finally, we need an understanding of the word “comfort”.

“Comfort, Comfort ye, my people, sayeth your God”. The word Comfort in Hebrew is “nachem.” And it means “to strengthen.”

I’m not talking about the comfort that this world offers. Worldly comfort comes from things of Babylon- the comfort of luxury, the secrurity of soothing our ills with consumerism and things. No, I mean comfort in the original Hebrew definition: nacham—to comfort, is the root of the name Noah, or Nouch.

When I stop and consider the comfort Noah gave his people, I have to chuckle. He was seen as crazy—truly a John the Baptist of his day—building a boat on dry land…but in the end Noah knew the meaning of comfort. He knew how to strengthen his people, to simply live the call when they would not listen.

So did Rosa Parks. She realized after her act of civil disobedience, that she was strengthened, and by extension, was able to comfort/strengthen her people, by her resolve to stand for dignity and equality in a wilderness of passive aggressive racism. Her act gave them the strength to walk to work- some as far as 20 miles in a boycott that lasted over a year, until segregation was ended on the bus system of Montgomery, Alabama. And through her strength, her comfort, a freedom movement was born.

Your wilderness can be the setting where you join God in making the crooked straight. Be strengthened! Go to the wilderness and then, live your call. Be a people of true comfort. Let it be so!